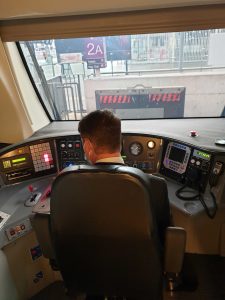 The Victoria’s Minister for Public Transport Ben Carroll has introduced the nine new VLocity trains at the Southern Cross station, Melbourne’s transport hub, before it headed off to Ararat direction.

The new batch of trains feature the next evolution of VLocity design, which include improved accessibility features and dedicated spaces for bicycles. The new models have seating for 222 passengers in each train, with tray tables available on more seats than previous VLocity models. All the new trains will include quiet carriages, two onboard toilets, space for up to six bicycles and mobile signal boosters.

Increasing the number of trains available has given V/Line greater flexibility to perform maintenance on other trains without disrupting services and has reduced the risk of trains being replaced by coaches or running with fewer carriages.

The trains will deliver more reliable services to regional Victoria and increasing the network’s capability to meet future demand. “It’s great news for regional Victoria that these new trains are on the network, to ensure we can deliver reliable services for passengers. These new trains combine the things passengers love about the existing VLocity fleet with state-of-the-art technology to make journeys even more enjoyable,” Ben Carroll said.

The trains have been added to V/Line’s current fleet of VLocity trains and are initially being rotated onto existing scheduled services. The growing VLocity fleet will eventually enable V/Line to add more services as part of a future timetable change. 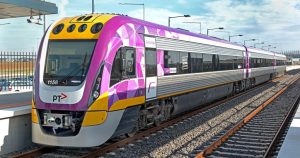 The trains were manufactured by Bombardier Transportation at the locally plant in Dandenong, supporting 100 direct jobs at the factory and hundreds more throughout the supply chain.

As part of the 2019-20 Victorian State Budget 18 new, three-carriage VLocity trains, construction has started on Victoria’s first two standard gauge trains which will run on the Albury line, along with another four broad gauge trains.