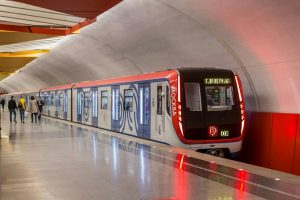 In 2020, the city of Moscow will launch construction works for Biryulyovskaya and Rublyovo-Arkhangelskaya metro lines.

The tracing of the first section of Biryulyovskaya line has already been approved. It will have nine stations, with the first one to be located on the grounds of the former Likhachyov Plant. The former industrial zone needs to improve its transport accessibility, as this area is rapidly developing, with housing, kindergartens, schools, clinics being built, and new jobs created. The station that is to open here will have transfer to the ZIL station of the Moscow Central Circle. Other station will offer transfer to Technopark of Zamoskvoretskaya Line, next to which the ‘Dream Island’ is being built, the largest indoor themed amusement park in Europe. Starting in the former industrial zone, the line will run under the Moskva River to Nagatinsky Zaton to link the Big Circle Line with Klenovy Bulvar station. Then it will run to the Kuryanovo district, since there are still no metro stations within walking distance. Two stations are to be built in Tsaritsyno, in Kavkazsky Boulevard and Bakinskaya Stree Eastern Biryulyovo, which has been waiting for metro for a few decades, will also have two stations. Eastern Biryulyovo, which has only one MCD station, will also have two more stations.

The first section is expected to be commissioned in 2024–2025. Later, the line is to run to Shcherbinka, with the metro to open here by around 2028. The line can be extended from the former ZIL to the centre. The new line will reduce transport travel by 30 minutes.

The Biryulyovskaya line was added to the master plan 20 years ago, but the construction was suspended.

The first section of Rublyovo-Arkhangelskaya new metro line with six stations is expected to be also opened in 2024-2025. It will provide transport connection to the Big Circle Line and the Moscow Central Circle. The line will be extended by three more stations which are expected to enter services in 2028.