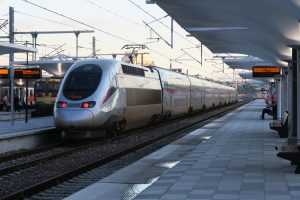 The Government of Morocco has announced a MAD 7.7 billion (USD 850.5 million) rail investment plan from 2022 until 2024 to modernise and develop country’s the rail infrastructure and the existing stations.

The funding will support the institutional and organizational restructuring plan of Moroccan National Railways Office (ONCF) which includes the modernisation and structure reform of country’s rail sector.

The rail company and the government signed in July 2019 an agreement on these investment plans, but a decision has not been made and it should be further discussed. This agreement would readjust the financial situation of the railway company which faces a debt of MAD 43 billion (USD 4.75 billion) recorded at the end of 2020. The agreement between the government and ONCF also includes the separation of the commercial operation from the management and development of the infrastructure.

In the first half of this year, MAD 687 million (USD 75.9 million) was the value of the investment and it is expected that by the end of this year MAD 2.7 billion (USD 300 million) will be invested.

The 2022 bill states that the Covid-19 pandemic led to a 98% decrease of passenger transport from March to May 2020 and to preserve ONCF’s financial stability and its transport activities, a contingency plan has been implemented.

MAD 50 billion (USD 5.5 billion) was the investment allotted for the 2010-2020 period which determined infrastructure modernisation and also the opening in 2018 of the Al Boraq high-speed rail line linking Casablanca and Tangier.

The rail investment plan includes the development of the infrastructure for which a USD 4.5 billion contract was signed in September for the construction of a rail system of 1,000 km rail of which 460 km will be high-speed rail connections.

For the modernisation of the rolling stock, Alstom has opened last year a manufacturing facility in Fez and recently has signed a maintenance agreement for the Prima M4 locomotive fleet.