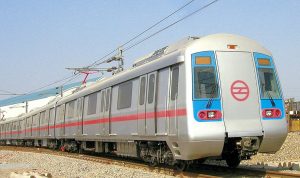 Indian train manufacturer BEML awarded Mitsubishi Electric a contract for the delivery of propulsion equipment for 80 new cars for Delhi Metro ordered in 2019.

The equipment is capable of enduring severe conditions, such as high temperatures, high humidity and thick dust.

The propulsion equipment will be manufactured by Bidadi Factory of Mitsubishi Electric India Pvt. Ltd. (MEI) in Bengaluru, Karnataka that has been producing propulsion equipment, such as traction motors and inverters, for supply to the local market. The MEI Bidadi Factory was established in 2015 to locally manufacture and deliver equipment in support of the Indian government’s “Make In India” initiative for local production.

Last year, Delhi Metro and BEML Ltd signed a contract for the delivery of 80 RS15 broad gauge metro cars compatible with the existing RS1 train fleet. The new cars will enter passenger transport on city’s Line 1, 2 and 3. The cars will support the conversion of the RS1 six-car trains into eight-car trains.

Mitsubishi Electric is an important supplier for India’s metro market and started to supply propulsion equipment for the Delhi Metro Phase I Project in 2001. The energy-saving performance and high quality and reliability of company’s equipment has led to continuous orders from major metro systems in India for the past 19 years.

The economy of India is pushing forward with a plan to improve and expand metro networks in major cities such as Delhi, Bengaluru, Mumbai, Hyderabad, Ahmedabad, Kolkata and Pune-cities with populations of at least 4 million-as well as cities with populations from 2 million to less than 4 million, such as Nagpur, Jaipur, Lucknow and Kochi.

In the future, some 20 cities plan to expand their metro markets.