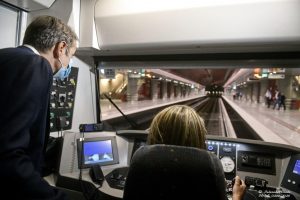 The Greek Prime Minister Kyriakos Mitsotakis and the Minister of Infrastructure Kostas Karamanlis, together with the representatives of Attiko Metro have officially inaugurated the Athens metro Line 3 extension from Agia Varvara to Nikaia.

The 4-km metro section served by three stations now provides transport connection between city’s western suburbs and the International Airport Eleftherios Venizelos and it will further extended to Piraeus.

The new metro section is expected to be used by 63,000 passengers per day eliminating 11,000 cars per day while eliminating 65 tonnes of carbon dioxide daily, the Minister said at the opening ceremony.

In 2022 Maniatika, Piraeus, Dimotiko Theatro are the other three metro stations which will be opened completing the entire Athens Metro Line 3 extension of 7.6 km with 6 stations. When fully operational, the line will have a total length of 24 km with 27 stations linking Piraeus to the Airport. The metro extension will have a ridership of 132,000 covering the distance between the between the Port and the International Airport within 45 minutes.

“When completed, the new metro connection between the Port of Piraeus and the Eleftherios Venizelos airport will offer development opportunities and benefits to the wider area of Athens and Piraeus as well as to the national economy,” Karamanlis said. 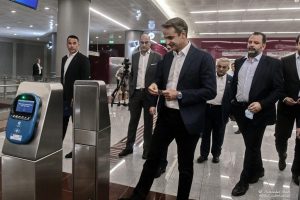 section is part of the Haidari-Piraeus metro project envisaging the Athens Metro Line 3 extension by six stations to Piraeus. The Piraeus station will be a major hub providing transport connection with the metro Line 1, the port, the tramway system and the suburban railway network.

The construction of the extension is performed by a consortium comprising J&P – Avax, Ghella and Alstom under a contract signed in 2012. The consortium submitted the lowest bid of EUR 343.96 million.

The metro development constitutes a EUR 730 million investment in areas of Piraeus and other municipalities in the wider area (Nikea, Korydallos, Aghia Varvara), which are facing traffic congestion.