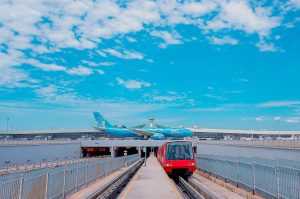 Malaysia Airports (Sepang) awarded Pestech Technology Sdn Bhd a contract for the design, supply, installation, testing and commissioning of the Aerotrain APM system at the KL International Airport. The contract also includes the associated works under the Option 2 which covers the financing, operation and maintenance until 2034. To implement the project, Pestech will be working with a Bombardier Transportation (now Alstom).

USD 178.1 million (RM 742.95 million) is the total value of the contract under which Pestech Technology will start the works in March and will last for 3 years. The 10-year O&M service contract will begin in March 2025 until February 2034.
The project involves the replacement of the APM vehicles, power supply, communication and signalling systems, APM equipment at the existing stations, maintenance facilities and equipment.
The rehabilitation works of the existing 1.2 km line will be implemented whilst the services of the APM between the Main Terminal Building and the Satellite A Terminal is to be maintained under minimal interruption during all phases of the project.

“No doubt there will be some inconvenience to passengers in the next three years during the upgrade period. While we will endeavour to minimise the disruption of service, passengers will continue to be shuttled using the airside bus service which has been running well as an alternative service since 2017,” the Managing Director of Malaysia Airports, Iskandar Mizal Mahmood said.

The new Aerotrain APM system will be improved in terms of safety, comfort, appearance, energy consumption and diagnostics, among others. It will also offer flexibility for seamless connections for new terminals in the future.

In 2020, Malaysia Airports awarded Jacobs Engineering a contract to provide project management consultancy services from the development of detailed design stage to the project completion, using the Design-Build-Finance-Operate-Maintain (DBFOM) approach.

The current Aerotrains have been in service shuttling more than 300 million passengers between the satellite and main terminal buildings since the airport opened 23 years ago. Over the past few years, the ageing Aerotrain system frequently faced service disruption, contributing to operational inefficiency. This has caused inconvenience to the passengers who must use the alternative busing service instead.