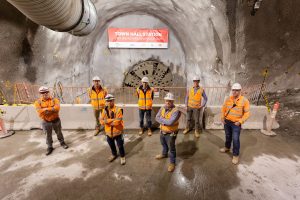 “This is a huge milestone for the amazing team at the Metro Tunnel. This vital project is a year ahead of schedule but there’s still with a huge amount of work to be done to finish the stations and get the tunnel ready to deliver more trains, more often,” Minister for Transport Infrastructure Jacinta Allan said.

The last TBM to hit the finish line was Meg, which arrived at the new Town Hall station last week. The other TBMs, Millie, Alice and Joan, arrived at the site over the past month.

TBMs Joan and Meg dug their final 670 metres under Swanston Street from the State Library station site over the past three months. TBMs Millie and Alice began tunnelling in December to complete their final 1.8 km leg under St Kilda Road and the Yarra River.

The four tunnel boring machines, which have tunnelled on six separate legs between Kensington and South Yarra, installing more than 55,000 curved concrete segments to create a waterproof tunnel lining. 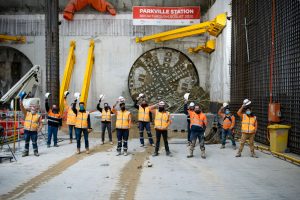 The machines have removed 600,000 cubic metres of rock and soil, or around one third of the total 1.8 million cubic metres to be excavated for the entire project.

The TBMs have lined the tunnels with around 250,000 tonnes of concrete, tunnelling an average of 90 metres per week.

They dug as deep as 40 metres below ground, passing 12 metres under the Yarra River, seven metres beneath the Burnley tunnel and just 1.5 metres below the City Loop.

The huge TBMs are now being dismantled and part of them will remain underground to form part of the permanent tunnel lining, and the remaining TBM components will be assessed for potential reuse on other tunnelling projects.

While the TBMs have finished the rail tunnels between the project’s five stations, roadheaders, the digging machines excavating the CBD station caverns, are still at work digging the final section of tunnels alongside the platforms at Town Hall Station.

The next phase of works is focused on the construction of the 26 cross passages, the short tunnels that connect the main tunnels and are an important safety feature for passengers should an incident occur. With the tunnel entrances at South Yarra and Kensington completed, work has also begun to connect the entrance structures to the tunnels.