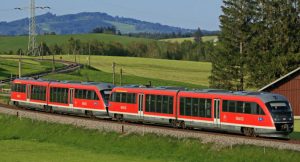 Knorr-Bremse and Deutsche Bahn signed a framework agreement to modernise the braking system of at least 155 of VT 642 regional multiple units (Desiro DMUs).

Under the agreement which will run until 2024, Knorr-Bremse is to supply conversion kits with the new ESRA Evolution brake control and will support Deutsche Bahn with training courses on recommissioning the vehicles when modernisation is completed.

From the beginning of this year, Knorr-Bremse had supplied five of the new brake control units and will be delivering at least 30 per year up to and including 2024. The modernisation work will take place at the DB’s workshops in Chemnitz and Erfurt.

Knorr-Bremse RailServices will be supporting the initial commissioning and training Deutsche Bahn technicians in the integration of the new brake control platform into the regional vehicles’ braking system.

Before the signing of the agreement, Knorr-Bremse was granted by the German Federal Railway Authority its first ever unconditional ‘authorisation for placing in service’ for a modernised prototype from the VT 642 class. Under this authorisation, an unlimited number of vehicles can be converted to brake control units corresponding to the one with which the prototype was modernised and then used for public transport. The decisive factor for granting the authorisation was that the design of the brake control unit complies with all current requirements and that its interface compatibility facilitates integration into existing vehicles.