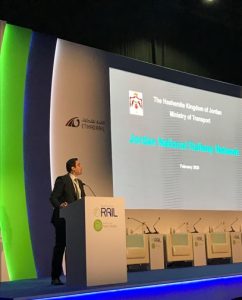 Jordan Ministry of Transport has a strong railway development strategy which ‘will explore country’s strategic position as the country has the potential to be a major trade and transport hub. The transport system ca be the gateway between Asia and Europe, as well as Turkey and GCC. The railway network will be implemented in several phases which will provide transport links with Iraq, Syria as well as Saudi Arabia,’ Khalid Saif, the Transport Minister of Jordan said at the Middle East Rail held in Dubai, where Railway PRO is media partner.

Jordan intends to develop a 1000-km railway network within four phases resulting in railway connections with China and Europe. The standard gauge network will be primarily used for freight traffic, allowing the operation of 1,500-meter trains with a 30 tonnes axle load. Trains will be able to run seeds of 120 km/h.

Under the first phase, Jordan will construct a railway line between Aqaba, a port city on the Red Sea’s Gulf of Aqaba, and the capital Amman. The standard gauge line will have a total link of 400 km connecting the Aqaba ports – the container terminal and industrial area to Maddouneh dry port in Amman. The feasibility studies for this phase are fully updates and in the second half of 2020 the detailed design will be completed. According to the minister, land expropriation is almost completed.

In the second half of this year, the tender documents will be completed. The railway line will be designed for freight traffic. This first phase will allow rail container traffic to grow by 5% until 2050, while the capacity of Aqaba container terminal is estimated at 3 million TEUs. In addition, phosphate traffic will grow by 3% per year until 2040 when 11.9 million tonnes will be transported on the route, including to Iraq.

The second phase involves the construction of a new railway line between Maddouneh and Oman, while the third phase will provide transport link from the dry port to Iraq. The fourth phase will see the creation of a railway link to Syria. “By the construction of a railway network, we will reduce road traffic congestion shifting freight transport to railways and will reduce the emissions and the environmental impact. We want this project to be implemented very soon,” the minister concluded.