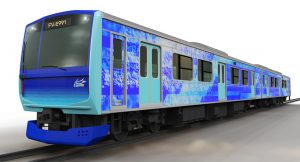 The three companies will collaborate, develop and test the new generation of train which will use hydrogen powered fuel cells and storage batteries as its source of electricity.

“By collaborating to develop these test railway vehicles, we aim to further improve the environmental superiority of railways and realise a sustainable society. The development of innovative rolling stock powered by hydrogen will contribute to the development of a low-carbon society as it helps to curb global warming and diversify energy sources,” the companies say.

The three companies will adapt the fuel cells used in automotive sector for railway applications.
Together, they will create hybrid hydrogen-electric train with the aim of achieving the high-power output control necessary to drive railway vehicles, which are much larger than automobiles.

The hybrid (fuel cell) pilot train will use the FV-E991 series vehicle in a two-car configuration. The hybrid drive system comprising the main circuit storage battery and the power converter will be provided by Hitachi, while the fuel cell device will be developed by Toyota.

HYBARI is the train’s nickname from hydrogen-hybrid advanced rail vehicle for innovation. Incorporating a blue splash pattern to represent the moistening of the earth and symbolise water generated from the chemical reaction in the fuel cells as a motif, the railway vehicle design conveys both a sense of speed and a futuristic image.