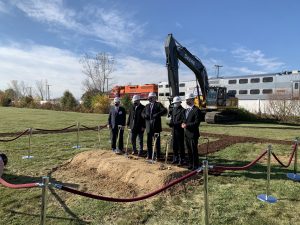 On 28 October, Eric Holcomb, the Governor of Indiana has officially inaugurated the construction works for the West Lake Corridor project, the state’s largest public transit investment in its history.

The project involves the construction of a 12.5 km-long rail extension of South Shore Line from the West Lake Corridor to Chicago which will provide transport services between Dyer and Hammond in Indiana.

“By bringing commuter rail through the heart of Lake County, the West Lake Corridor project is a game changer for northwest Indiana and the entire state. This vital infrastructure project will immediately result in 1,000 well-paying construction jobs. Unprecedented economic development in the region will now be possible as we connect Hoosiers, while also attracting talent and business to lower taxes, better quality of life and great communities in Indiana,” Eric Holcomb said.

The construction is expected to be completed in late 2024 with passenger service starting in early 2025.

USD 945 million is the total value of the project. Recently, the U.S. Federal Transit Administration and the Northern Indiana Commuter Transportation District (NICTD) signed an agreement to provide a USD 354.6 million grant for the West Lake Corridor project.

The project is being designed with a focus on sustainability and wetland mitigation, incorporating best practices to protect the environment.

In addition to this project, the authorities plan to construct the double-track on the South Shore Line. Combined, the double track Northwest Indiana and West Lake Corridor projects are projected to attract approximately USD 2.3 billion in private investment to northwest Indiana, and result in over 6,000 new jobs and USD 3 billion in economic impact by 2048.