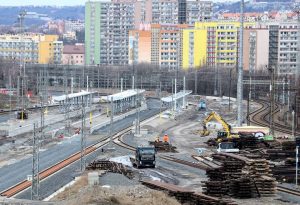 The Czech Committee of the State Fund for Transport Infrastructure approved an increased budget for railway infrastructure projects which will be performed in 2020.

“We managed to increase the budget of our organisation thanks to a clearly declared support of our government which is aware that railway transport plays a strategic role within the whole Czech Republic. Therefore it considers the development of the railway as one of its main priorities“, said Správa železnic Director General, Jiří Svoboda.

The increased sum will be showen in the non-investment field to strengthen resources for repairs and maintenance of railway lines. In case of non-investment resources, it represents a sum of CZK 1.85 billion (EUR 73.4 million) and consists in its whole of domestic resources.

The remaining sum of approximately CZK 2.4 billion (EUR 95.3 million) will be used for strengthening investments. The sum consists both of national resources (EUR 39.7 million) and EU resources, approximately from two-thirds from the Operational Programme Transport and from one-third from the Connecting Europe Facility Programme (CEF).

Relating to investment funding, the increased resources will be used specially to start new constructions which were not covered by the budget. This concerns the electrification of Brno – Zastávka u Brna line, GSM-R installation on Chomutov – Cheb and Ústí nad Labem – Chomutov lines, ETCS deployment on the Beroun – Plzeň and Mosty u Jablunkova – Dětmarovice lines, the revitalization of Chlumec nad Cidlinou – Trutnov rail connection, the modernisation of Pardubice railway junction and Bartoušov station, as well as the reconstruction of R110 kV at Jablunkov traction substation.

A part of increased resources for investments will be used to strengthen financing of constructions already launched on the Valašské Meziříčí – Hustopeče nad Bečvou section, of track adaptations at Žďár nad Sázavou railway station.

The budget will also support the repairs and reconstructions under the building modernisation programme.