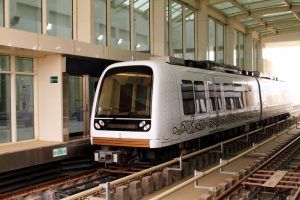 Hitachi Rail signed a EUR 72.5 million contract with Princess Nourah Bint Abdul Rahman University to operate and maintain the autonomous metro system in Riyadh for the next three years.

Under the contract Hitachi will operate the whole autonomous metro system, while maintaining the trains and infrastructure, including stations, mechanical and electrical systems and the depot and viaduct. Hitachi Rail completed the building of the autonomous railway in May 2011.

The rail network consists of 4 elevated lines spanning 11.5 km that connects 14 stations. The 22 two-car automated metro trains have a capacity of 110 passengers and can travel to a maximum speed of 60 km/h. Hitachi Rail has operated and maintained the Princess Noura Bint Abdul Rahman University since March 2018.

The Princess Nourah Bint Abdul Rahman University is the largest women university in the world able to host 60,000 students that can travel within the huge campus area with the autonomous train. The electric powered trains provide a sustainable low carbon alternative to travelling by car.

The autonomous metro system is serving the biggest university in the world situated in the North of the Saudi Capital Riyadh, which needs such a transport network to enable students to access easily to each part of the campus.

One of Princess Nourah’s main goals is to become a university that pioneers greener transport while also helping students and administrative staff reduce the personal use of cars and motorcycles on campus trips. The transport system policy has been established on campus by providing service buses and trams for students, staff, and visitors to facilitate free rides and also to reduce car use within the university.

The university campus includes the many academic, administrative and health facilities, scientific research centers, service facilities and support services buildings, recreation centres and university housing. The university has over 600 buildings spread over an area of 13 million square meters.