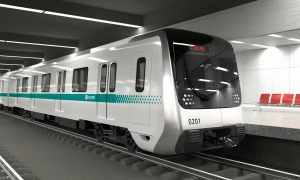 The 390 metro cars for Harbin Metro will be configured into 65 six-car trainsets. Under the contract, the manufacturer will deliver 216 cars (36 trains) to operate on Line 2 and 174 cars (29 trains) for Line 3.

The new metro trains will operate on the Line 2 Phase 1 running ugh the city from north to southeast.  It will have a length of 28.7 km, served by 19 underground stations. The section is expected to enter services in 2021. The line will link Jiangbei University Town with Qixiangtai station.

The 29 new trains will run on the Line 3 Phase 2 which is scheduled to open in 2022. The line will have 32 km served by 30 stations. It is a is a circular line around the urban area of Harbin. The new line will offer transport connection between Chengxianglu and Sport Park/ Yidaeryuan to Taipingqiao station.

CBRC is a 50:50 joint venture between CRRC Changchun and Bombardier Transportation. We appreciate the trust from both Harbin Metro Corporation and CRRC Changchun, and we will deliver the cutting edge metro cars on time at quality and within budget despite the challenges of COVID-19,” Jianwei Zhang, the President of Bombardier Transportation China, said.

The city has plans to develop its metro transport system which is expected to be formed by 5 lines. Harbin Metro system will have a total length of 143 km. Following these lines which will enter commercial operation within the next two years, the authorities have plans to extend the first line by 2.5 km and two stations. The line was opened in 2013 and has a length of 26 km served by 23 stations. From 2025, the city would add 82.5 km of new metro lines with 63 stations.