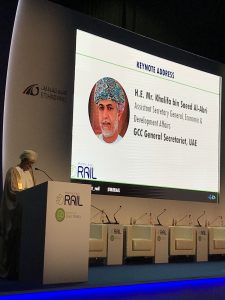 ‘We are continuing our collaboration, which is essential for the creation of the GCC railway network. We have the guidelines to monitor the transport system in the region and we have drafted the unified law on railway transport, which is a common interest to develop it. Soon the rule book will be issued, and we are also discussing on ticketing and logistics common projects which will contribute to the growth and development of this transport mode. Important steps are taking for the creation of the railway link between Saudi Arabia and Bahrain,’ said Khalifa Bin Saeed Al-Abri, Assistant Secretary General for Development and Economic Affairs at the GCC Secretariat at the Middle East Rail.

The unified railway law was announced in 2019 with the aim of harmonisation and development of freight and passenger railway transport in the region. It is considered an important regulation allowing the transformation of the entire transport system of the region, as well as national level. The involves authorities had to regulate and update the technical requirements to bring them at a unified level. The GCC railway network will link the six countries by a 2,200-km system from Muscat, in Oman, to Kuwait.

Bahrain and Kuwait will have the needed railway connections with the rest of the countries. Meanwhile, United Arab Emirates is constructing the second phase of its railway system, and in 2021 Qatar and Saudi Arabia, Oman and United Arab Emirates will benefit of the transport links.

It is expected that by 2023 all GCC railway network to become operational.