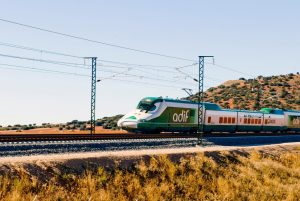 Adif Alta Velocidad has received a EUR 205 million financing from the European Investment Bank for the procurement of new rolling stock and for the maintenance of the railway infrastructure.

“The advantages offered by rail in areas such as pollution, congestion and noise can help the European Union to consolidate its environmental policies. EIB support is key to the development of this kind of project, which makes a clear and vital contribution to the European Green Deal. Against a backdrop marked by the consequences of the COVID-19 crisis, all of Adif’s advanced projects are in line with the key pillars of the EU’s recovery plan,” said Adif Alta Velocidad President, Isabel Pardo de Vera.

EUR 155 million financing is provided for the purchase of four dedicated railway line inspection trains and 44 locomotives for rescue operations, maintenance support and investigation that will work across the rail network. By this procurement, the reliability and quality of railway transport services will be improved and will also create new jobs for 2 200 people to manufacture the rolling stock, together with 60 permanent positions for its operation. The EIB and Adif Alta Velocidad have signed the first tranche of this financing, which amounts to EUR 79 million.

The EIB also provided Adif Alta Velocidad a EUR 50 million loan to support the Mediterranean Corridor, a key component of the European rail network and part of the Trans-European Transport Network that will connect the main cities of the Spanish Mediterranean via interoperable rail lines able to accommodate high-speed trains. Previously, the bank has provided EUR 650 million for this project. The goal of this EIB financing is to secure the resources needed to make the interoperable single European railway area a reality on the Spanish Mediterranean coast.

The EUR 700 million provided so far has gone towards the construction of the Vandellós cut-off (Tarragona) and the Castellbisbal (Barcelona) to Almussafes (Valencia) line, currently in the implementation phase. The EIB estimates that the project will involve the temporary employment of around 7 000 workers during the construction phase and the creation of about 200 permanent jobs.

To support Spanish railway transport and to promote the country’s high-speed rail transport, the EIB provided a total financing of EUR 12 billion since 1991.