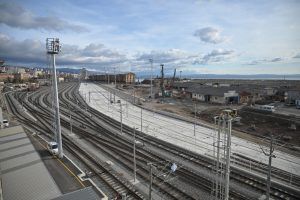 A state technical inspection was carried out in December 2021 at Rijeka freight train station after the reconstruction works were completed by HŽ Infrastruktura under the Rijeka Port infrastructure upgrade project implemented together with Port of Rijeka Authority.

The Croatian rail infrastructure manager is now expecting to obtain the use permit for the station. SŽ – Železniško gradbeno podjetje Ljubljana (Slovenia) has performed the reconstruction works while the supervision services over the execution of works was provided by Institut IGH and Investinženjering group from Croatia.

EUR 25.2 million is the total value of the project, 85% being the EU co-financing through the Connecting Europe Facility.

The Port of Rijeka – Container Terminal Zagreb Port project is the second project of HŽ Infrastruktura which was implemented with the Port of Rijeka Authority, after the Rijeka Brajdica project which was completed in 2020. The project’s goal is to eliminate the existing bottleneck and to adapt the infrastructure of Rijeka station to meet the future demand at the Port of Rijeka.

“Rijeka, as the largest Croatian port, will have modernised freight stations with increased loading and unloading capacity. Since the completion of works on Brajdica, the share of container trains has already increased, and it now amounts to 21%, which is 5% more than in 2020, before the completion of works. A further growth of rail freight transport is expected after the completion of the entire project ,” Marko Kukić, the project manager at HŽ Infrastruktura said.

With the completion of all works, the freight station will increase its loading and unloading capacity by rail to 360,000 TEU per year, which is about 60% of the total planned 600,000 TEU.