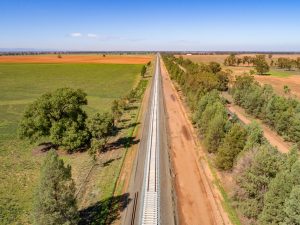 The modernisation and construction of Inland Rail first section between Parkes and Narromine in New South Wales has been completed on September 15, marking an important and historic milestone for the project which will provide transport link from Melbourne to Brisbane.

“Inland Rail is an investment in Australia – in our economy, in our regions and in the capacity of our future freight network. This is real progress on a project which has been talked about since federation, already our Government has delivered more than 1,800 jobs and $100 million in local stimulus through Inland Rail,” said Michael McCormack, Australia’s Minister for Infrastructure.

The project was launched in December 2018 and included upgrade works on the 98-km existing line and the construction of a 5.3-km railway section near Parkes, known as the North West Connection, which links Inland Rail with the existing Broken Hill rail line to Perth.  The construction works were performed by the INLink joint venture comprising Fulton Hogan and BMD Constructions.

The project involved a AUD 109.7 million (USD 80.2 million) total spending with local businesses, of which AUD 14.1 million (USD 10.3 million) has been spent with Indigenous businesses.
The project has a strong local involvement. A AUD 20 million contract was signed with Liberty OneSteel Whyalla (South Australia) to supply 14,000 tonnes of steel rail. A AUD 20 million contract was awarded to Rocla (Mittagong, NSW) for the delivery of 200,000 concrete sleepers, while a AUD 13 million (EUR 9.5 million) contract was signed with Holcim (Tamworth, NSW) for culverts weighing 26,625 tonnes. 365,000 rail clips came from Pandrol (Blacktown, NSW).

1,862 people worked on the project, of which 762 are local residents from the Parkes area. “As we continue building Inland Rail we will see even more growth opportunities for local businesses and employment for those in regional Australia,” Minister for Regional Health, Regional Communications and Local Government and Federal Member for Parkes, Mark Coulton said.

The Inland Rail first section has now a total length of 103 km which paves the way for the future 1,700 km railway corridor linking Victoria, New South Wales and Queensland.

By the end of the year, construction works will start for the next 188 km Narrabri – North Star project, in NSW, comprising upgrade works for 186 km and the construction of a 2.3 km rail section.

The Inland Rail project, divided into 13 distinct projects, is expected to be completed in 2025. The other 11 projects are in reference design stage. Within the project across the three states, 1,100 km of railway will be upgraded while 600 km of new line will be constructed.