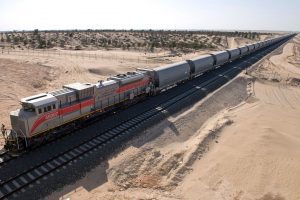 Etihad Rail awarded CRRC Yangtze a contract to manufacture and supply of 842 new freight wagons. With these new wagons, Etihad Rail is tripling the existing fleet which will reach more than 1,000 units.

The new fleet includes four different types of wagons with different capacities, which increases Etihad Rail’s annual transport capacity by 8%, to reach up to 59 million tonnes.

The newly acquired wagons will transport containerised and bulk cargoes, petrochemicals, construction materials, industrial and perishable goods for the national and international market.

The contract includes the delivery of 97 articulated wagons to transport normal and light commodities. They will have a maximum load of 400 tonnes each and will be able to run at speeds of 120 km/h. The order also includes 32 of flat containers with a load of 100 tonnes being able to run at 100 km/h. They will be used to transport heavy commodities including cement and liquid cargo.  The Chinese company will also supply Etihad Rail 294 aggregate hopper wagons with a load of 100 tonnes, 31 single wells wagons with a capacity of 95 tonnes.

“Etihad Rail is establishing a sustainable national rail network that will make a qualitative change in the freight forwarding and logistics sector in the UAE. The new wagons will be manufactured according GCC specific requirements which include innovative braking systems, signalling, control and safety systems that will allow safe transport services while being tailor made for region environmental conditions,” said Sheikh Theyab bin Mohamed bin Zayed Al Nahyan, the Chairman of Etihad Rail.

The new freight wagons will be put into commercial operation on the Stage Two of the UAE’s railway network comprising 605 km of new line from Ghuweifat on the border with Saudi Arabia to Fujairah on the east coast. The network will connect the Emirates via Abu Dhabi, KIZAD, Khalifa Port, Jebel Ali Port, Dubai, Sharjah, Ras al-Khaimah and Fujairah on the East Coast, linking with the existing line at Ruwais, effectively uniting the major industrial ports and trading centres of the country.

The wagon contract follows a locomotives contract signed with Progress Rail for the supply of 38 EMD locomotives which will expand Etihad Rail’s locomotive fleet to 45 vehicles.