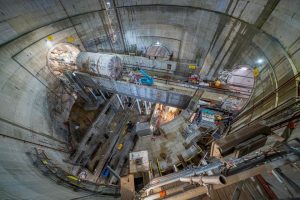 EUR 120 million is the value of the contract consisting of supplying and installing the track, overhead contact line and equipment along a 16.5 km section within a tunnel. The equipment includes walkways, cable trays, dry standpipe and drainage pumps.

The project is to start in May and is expected to be completed within 64 months. After the design phase, the works will be launched in mod-2021.

The Paris Line 15 South – West will provide transport services between the future Pont de Sèvres station and the future Les Ardoines station east of Vitry sur Seine. It will be connected to the Vitry sur Seine infrastructure maintenance site, for which ETF will install the track, overhead contact line and equipment under a contract awarded in January 2020.

Line 15 South will run from Pont de Sèvres to Noisy-Champs. The trains will cover the 33-km line within 37 minutes, crossing 22 municipalities with a total population of more than one million. All the 16 stations along the line will have transport connections to the RER, metro and tramway services providing an integrated transport system.

The line is expected to be put into commercial operation in 2025 and it is estimated that 300,000 passengers will use the new services each day.

Vinci Construction subsidiaries are currently constructing the Line 15 South tunnels and stations and extend the Line 14 to the south. The Rail – ETF consortium recently won the design and track installation contract for the Line 14 south extension which will offer transport connection from Olympiades station, the current terminus of the line, and the Orly Airport.

Recently, a Vinci-led consortium was awarded the first Line 18 construction contract for 11.8 km of tunnels and three stations.