The EUR 799 million contract involves the digging of 11.8 km of tunnels using two tunnel boring machines and the construction of three stations, 13 ancillary engineering structures, 10 branches connecting with the tunnel, and 850 metres of cut and cover. In total, more than 1 million cubic metres of material will be excavated. 20% of the contract value is reserved for SMEs.

The construction works, including for the Antonypôle, Massy Opéra and Massy-Palaiseau stations, are expected to be completed within an 83-month period.

The Line 18 will offer transport connections from Orly Airport to Versailles by 2030, in western suburb of Paris,

The Line 18 will allow passengers to travel from Orly Airport to Versailles Chantiers within 30 minutes. Line 18 to Versailles will be opened in 2030, when it will have 10 stations serving some of south west Paris’ most strategic hubs. The entire line will have 21 km of underground and 14 km of elevated sections, crossing Plateau de Saclay. Line 18 will provide passengers transport connections at Orly Airport, Massy Palaiseau (to RER B and C, and high-speed rail services) and Versailles Chantiers (via RER C and Transiliens regional rail network). 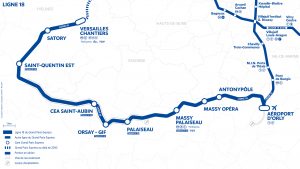 The Grand Paris Express Line 18 project will be implemented within two main phases. The first one includes the construction of the section between Orly Airport and CEA Saint-Aubin which is expected to be completed in 2024. Under the second phase, scheduled to be completed in 2030, the line will be extended from CEA Saint-Aubin to Versailles Chantiers.

GPE automated transit network will have 68 new stations and 200 km of additional tracks, forming a ring route around Paris – the Line 15, and new connections to the neighborhoods, through lines 16, 17 and 18.

Vinci is working with on other Grand Paris Express works packages through its subsidiary  Eurovia for rail track laying and Vinci Energies.