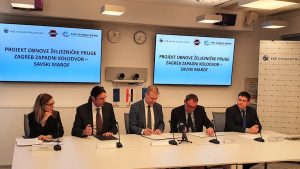 HŽ Infrastruktura and Swietelsky signed a EUR 49 million (HRK 365.7 million) contract for the reconstruction of a railway line linking Zagreb Western station and the town of Savski Marof, at the border with Slovenia. It is expected that the reconstruction works will be completed within 27 months.

An investment of EUR 28.2 million (HRK 210 million) is covered by the World Bank.

The 17.8 km double-track section is part of the RH1 corridor, which is extremely important for international freight and suburban transport. 160 trains are daily running on the corridor.

Once completed, trains will run at a speed of 120 km/h, increasing the capacity of the railway line.

“This is another contract that marks the huge investment programme to modernise our railway transport. The railway from Zagreb to the Sava Marof really needs a major overhaul. After two years of reconstruction works, the passengers will clearly see the benefits, resulting in a faster and better-quality travel, which is the ultimate goal of this project,” said Oleg Butković, the Minister of Infrastructure.

The project includes the harmonisation of the signalling and telecommunication system, rehabilitation of three bridges, culverts and underpasses renovation, as well as the modernisation of two stations.

“The reconstruction of the section from Sava Marof to Zagreb Western station is a project that, when completed, will strengthen the most frequent railway route in Croatia. The renovation of the existing infrastructure will increase the level of safety and capacity, allowing increase speeds and make suburban transport better and more attractive to passengers,” Ivan Kršić the President of HŽ Infrastruktura said.