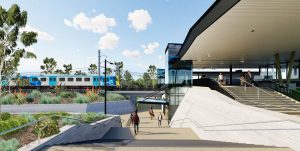 After the removal of 11 level crossings on the line, construction works started to duplicate 8 km of track between Cranbourne and Dandenong, using more than 22 km of steel rail and more than 16,000 new sleepers manufactured in Australia.

Under the project, a brand-new station at Merinda Park will be constructed. The construction works will begin next month as parts of the old station are removed. The works will be staged to keep the station as operational as possible during construction. The design for the new station have been updated in response to community feedback, with two lifts added to the design and a taxi zone moved closer to the station entrance to improve accessibility. The new station will also feature a new pedestrian underpass with lifts, ramps and stairs to access the platforms and covered waiting areas.

Works for Cranbourne Line upgrade are delivered by two alliances. An alliance comprising of McConnell Dowell, Arup, Mott MacDonald and Metro Trains Melbourne will duplicate the track between Dandenong and Lynbrook and remove the Greens Road level crossing in Dandenong South. The remaining track duplication between Lynbrook and Cranbourne will be delivered by an alliance of Laing O’Rourke, Jacobs and Metro Trains Melbourne. This alliance will also build a new Merinda Park station and expand the car park at Lynbrook station with an additional 135 spaces.

The fully duplicated track will allow for trains to run every 10 minutes on the Cranbourne Line,  which, together with the Melbourne Metro Tunnel and new bigger trains, will create capacity for 121,000 extra peak passengers every week across the Cranbourne and Pakenham lines.

At the same time, the Evans Road bridge is also taking shape, which will remove the Evans Road level crossing by the end of this year, reconnecting the Lyndhurst, Lynbrook and Cranbourne West areas for the first time in 15 years to restore local connections and improve travel times.

The duplication of the Cranbourne line is due for completion by 2023 and will pave the way for planning for a future extension of the line to Clyde.