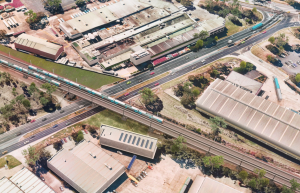 Victorian government has announced that the works for Cranbourne double-track construction and the removal of the dangerous and congested level crossings will soon begin. The new project will deliver more reliable train services for Melbourne’s growing southeast.

Under the project, 8 km of single track from Dandenong to Cranbourne will be duplicated, paving the way for trains every ten minutes on the Cranbourne Line. This would help move trains more quickly through these stations, cutting delays and getting people home sooner.

Track duplication works will be completed by 2023.

A new Merinda Park station will be constructed and fitted with dual platforms and better facilities.

Major contracts have been awarded for the next stage of the Cranbourne Line Upgrade. A consortium of McConnell Dowell, Arup, Mott MacDonald and Metro Trains Melbourne will deliver track duplication between Dandenong and Lynbrook and Greens Road level crossing removal.

A consortium comprising Laing O’Rourke, Jacobs and Metro Trains Melbourne is responsible for track duplication between Lynbrook and Cranbourne, the construction of Merinda Park station and Lynbrook station parking upgrades.