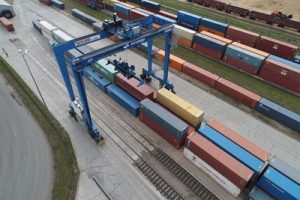 PKP Cargo Terminale signed a contract for Malaszewicze terminal modernisation and expansion project, including the procurement of the needed equipment.

The basing construction and assembly work at the Małaszewicze terminal will be carried out by Transbet, a Polish company. Under contract, Transbet will be responsible for the reconstruction of the storage and transshipment yard, track extension, drainage system installation. Transbet will also construct a storage facility and a parking lot at Trafo station.

In addition, the terminal will be equipped with a new intermodal reach stacker for container reloading, which will be manufactured by Zeppelin Polska.

The Malaszewicze terminal modernsation project will be completed in 2021. PLN 30.6 million (EUR 6.87 million) is the total value of the project which has received a European funding of PLN 12.8 million (EUR 2.87 million) under the Operational Program Infrastructure and Environment 2014-2020.

“Thanks to this investment project, we will significantly improve the intermodal train service process and increase the reloading capacity of Małaszewicz terminal,” Jacek Rutkowski, the president of PKP Cargo Terminale said.

PKP Cargo is estimating the increase of intermodal transport which also needs investment projects to provide additional capacity and to offer faster services. “We see an increasing number of multimodal transport services in the Polish and European economy, the market needs modern logistics solutions, and therefore we need to improve our operational capabilities not only for transport services but also for handling cargo at terminals,” said Czesław Warsewicz, the president of PKP Cargo.

The Małaszewicze terminal is located near the border with Belarus and is known as the gateway for China to the European Union. The terminal receives and dispatches the largest cargo volume sent by railways from East Asia to the EU and vice versa.

The terminal benefits a broad and standard gauge system and is an important intermodal terminal on the New Silk Road allowing train services and cargo handling on the route between the EU and Eastern European Countries, Belarus, Russia, Kazakhstan and China.