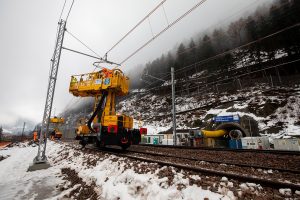 Rete Ferroviaria Italiana selected a Webuild (51%) – Implenia consortium as the preferred bidder to design and construct the Fortezza – Ponte Gardena rail section part of Brenner Base Tunnel (BBT) project. The South access line of BBT will extend for a length of approximately 180 km between the stations of Fortezza and Verona and will quadruple the current two tracks. The north end of the intervention consists of Lot 1 Fortezza – Ponte Gardena for which the tender was launched in August 2020.

The EUR 1.07 billion contract covers the construction of 22.5 km which includes underground interconnections and other works for Ponte Gardena. The project would expand by four times, mostly underground, the Verona – Fortezza line at the southern end of the Brenner Base Tunnel along the Munich-Verona railway axis. It will also improve the 425 km Munich – Verona railway line by adopting standards that exceed the speed and performance limits of the existing line, which currently obliges trains to travel at relatively slower speeds, especially on inclines.

Webuild is already working on three major construction sites of the Brenner Base Tunnel. The sites include Mules 2 – 3, the main section at the Italian end of the tunnel with 75 km of tunnels, the Lot Tulfes-Pfons section that includes underground civil works for 38 km of tunnels and the underground crossing of the Isarco River, near the southern exit of the Brenner Base Tunnel before the Fortezza station.

In February 2021 within the Isarco construction site, the route of the existing Brenner railway line has been shifted by relocating the east track, on which trains will travel southwards. In January, the east track – towards the Brenner pass – was shifted. These works are necessary in order to proceed with the excavation of the tunnels, main and interconnecting tunnels, which will be located on the route of the existing Brenner railway line. The existing line was shifted for approx. 900 metres with as little effect as possible on the operation of the current line.

Within the Isarco construction site, works are proceeding at full speed with the excavation of the tunnels under the river and the freezing activities, as well as the construction of cut-and-cover tunnels.

Four construction sites are currently in operation, two in Austria and two in Italy.

The Brenner Base Tunnel runs for 64 km between Tulfes/Innsbruck (Austria) and Fortezza (Italy), making it the longest underground railway stretch in the word. The BBT ends in Innsbruck in the existing railway bypass tunnel, which ends in Tulfes. A new rescue tunnel is being built running parallel to the bypass. The two-tube tunnel system between Innsbruck and Fortezza is 55 km long.