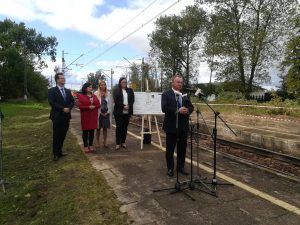 The project involves the construction of 70 km of new tracks, new stops, and the installation of traffic control devices.

The works will be performed by a consortium comprising Przedsiębiorstwo Usług Technicznych Intercor, Stecol Corporation and Sinohydro Corporation Limited.

“The next kilometers of tracks are constructed with the support of EU funds. Both stages of the works on the Czyzew–Bialystok section represent the largest Polish project financed by the Connecting Europe Facility (CEF). Its value is over EUR 800 million, of which over EUR 668 million is the EU contribution. The development of railways is an opportunity for Eastern Poland for a significant increase in competitiveness and specific benefits for business development,” Małgorzata Jarosińska-Jedynak, the Minister of Funds and Regional Policy said.

The works have started from the from the border of Podlaskie Voivodeship towards Czyżewo. In October, the contractor will begin the construction works on the section from Czyżew to Łapy.

“We invest in connections on a regional, national and international scale. Rail Baltica is one of the projects that increase rail capacity for both travelers and freight carriers. The result of the work carried out with the funds of the CEF Connecting Europe instrument is greater accessibility of railways, shorter attractive journeys and more efficient and economical freight transport services,” Ireneusz Merchel, the CEO of PKP Polskie Linie Kolejowe said.

The project will allow passenger trains to run at speeds of 200 km/h providing a 90-minute travel time from Białystok to Warsaw. A higher level of safety in rail and road traffic will be ensured by collision-free intersections. The line capacity will also increase, allowing more connections to be launched. 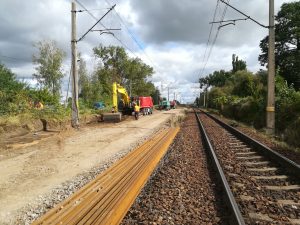 railway section from Warsaw to the border of the Masovian Voivodeship, travelers use reconstructed stations and stops, and trains will run on new tracks. The construction of a new bridge over the Bug River provides new possibilities for the rail route. There are built collision-free intersections, among others in Łochów and Topor.

The modernised section of the line from Warsaw to the capital of Podlasie, Białystok, on the international Rail Baltica railway route, is one of the most important investments on Polish tracks of national and international importance.

The works will be carried out in 2020 – 2023 as part of the “works on the E75 line, Czyzew–Bialystok section” project. The investment has a value of over PLN 3.3 billion (EUR 735 million) and is co-financed by the Connecting Europe Facility.

“We are very pleased that after the contract is signed, the modernisation of the next section of Rail Baltica, the Czyżew – Białystok route begins. This is an important investment for the Polish rail network, for Rail Baltica and the Trans-European Transport Network. It will contribute to faster and more comfortable rail travel and greener transport,” said Morten Jensen, the Head of Unit European Commission Innovation and Networks Executive Agency (INEA).

PKP PLK is preparing the works on the Białystok – Ełk section. The railway line from Białystok to Ełk is to be modernized in 2022-2024. In August, a tender was announced for the preparation of design documentation for the section from Ełk to Suwałki and Trakiszek (state border). Construction works on this section are planned for the 2023 – 2027 period.

Rail Baltica in Poland includes the railway connection from Warsaw through Białystok and Ełk to the border with Lithuania.