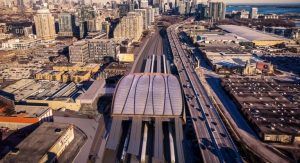 The transport authority of the Greater Toronto and Hamilton Area, Metrolinx, has started the upgrades at Exhibition station marking the beginning of construction work on the Ontario transit line.

The Exhibition station is significant because it will be one of the Ontario Line’s most popular transit hubs with connections to GO trains and TTC transit system.

When construction work will be completed at the station, fully accessible paths between the different lines and platforms will be provided, making it quick and easy to transfer between trains.

In December 2021, Metrolinx has announced the winner of the contract to build the new line.

All of these early works will be completed before major construction begins next year for the new station, tracks and platforms that will accommodate both Ontario Line and GO train services.

At peak of rush hour, about 6,300 people will transfer between the Ontario Line, GO trains and TTC at Exhibition Station.

The 15.6 km Ontario Line will deliver metro services to Toronto stretching across the city, from the Ontario Science Centre in the northeast to Exhibition Place in the southwest.

Current plans for the Ontario transit line include 15 stations, of which six interchange stations and over 40 new connections to GO Transit rail services and existing public transport services – the metro, tram and bus networks.

The line will provide a 30-minute direct travel from Exhibition Place to the Ontario Science Centre – no transfer will be needed. This is 40 minutes faster than today’s transit option, which requires getting on and off three separate vehicles. The line is projected to a 388,000 daily ridership.

The new line is one of the CAD 28.5 billion (USD 22.8 billion) four priority transit projects announced by the Province of Ontario in 2019 – the Yonge North and Scarborough metro extensions, Eglinton Crosstown West extension, Hamilton LRT.

The line will bring more transit to more in-need communities sooner than previously thought by using a mix of at-grade track, elevated guideways and underground tunnels. This type of approach comes with many benefits, including shorter construction timelines, faster and more convenient transfers and more rapid transit services for more communities.

The above-ground and underground track mix is not a new approach in Toronto, as this kind of infrastructure characterises TTC Line 1, Line 2 and Line 3.