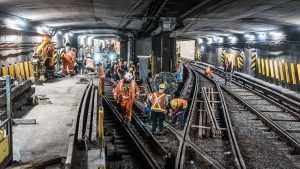 Metrolinx selected Bechtel as the delivery partner for the Ontario Line in Toronto which will create a more connected regional transit system.

Bechtel, with sub-vendors Bantrel and Comtech Group will provide resources, experience, and knowledge in preparation for the construction of the 15.6 km (9.7 miles) rapid transit line through the city of Toronto. Over half of the route is planned to run underground through new tunnels, with the remainder running along elevated and at-grade rail corridor sections of track.

The line will stretch across the city from northeast to southwest. The northern terminus will be located near the Science Centre and a critical connection to the Eglinton Crosstown Light Rail Transit line. The project’s southern terminus will be at or near Exhibition Place and Ontario Place along the City’s waterfront. The project includes 15 stations, 6 interchange stations and over 40 new connections to GO train lines and existing metro Lines 1 and 2, the future Eglinton Crosstown LRT, and numerous bus lines. Under the project, a maintenance and storage facility and passenger pick-ups and drop off areas at the interchanges will be built.

The Ontario Line is being delivered as three separate public-private partnership procurement contracts. For the rolling stock, systems, operation and maintenance, a RFP was issued in December 2020. For the Southern civil, stations and tunnel the RFP was launched in December 2020, while for the Northern civil, stations and tunnel, a RFQ will be issued early 2022.

The Ontario Line will be the first new metro line project in 50 years, and it was proposed in 2019 as the four priority transit projects Metrolinx is leading for the Greater Toronto and Hamilton Area (GTHA).

The line will be the largest single expansion in Toronto’s metro history, helping to ease congestion on existing transit lines throughout the city and bring transit to underserviced neighbourhoods.

The project is expected to be completed in 2030.