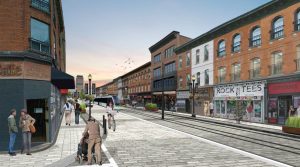 Hamilton City Council has ratified a memorandum of understanding with Metrolinx and the Ministry of Transport (MTO) to move forward with the Hamilton Light Rail Transit (LRT) project.

Metrolinx will start work with the City of Hamilton to establish a project team and collaboratively progress into procurement and delivery of the project.

In May 2021, a joint funding announcement was made by the provincial and federal governments committing CAD 3.4 billion (USD 2.68 billion) to the capital cost of the project, making the Hamilton LRT one of the largest infrastructure investments in the City’s history.

“The approval by Council of the Memorandum of Understanding for the Hamilton Light Rail Transit project is a key milestone and highlights the importance of collaboration across all levels of government, along with partners such as Metrolinx, and anchor institutions such as LiUNA Canada, McMaster University, Mohawk College and the Hamilton Chamber of Commerce. Together we are moving toward further advancing accessibility to public transit in our community,” the City of Hamilton Mayor Fred Eisenberger said.

The LRT line will be 14 km – long served by 17 stops connecting McMaster University in the west to Eastgate in the east. The new light rail vehicles running along tracks separated from regular traffic, offering frequent, safe and reliable service. The line will integrate with Hamilton Street Railway bus service, and connect with local bike share, and GO bus and rail service at the Hamilton GO Centre.

Next steps include the establishing of a project team and procurement process for delivery of the project.

Work continues this fall on the corridor as demolitions of vacant properties continue and early works construction on the project is expected to begin in early 2022.