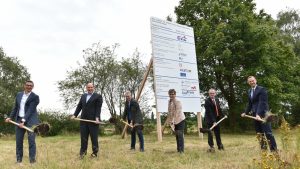 An 18-month test phase for the first two trains was successfully completed at the end of February.

With a daily capacity of around 1,600 kg of hydrogen, it is nominally one of the largest hydrogen filling stations in the world.

Thanks to a range of 1,000 kilometers, the Coradia iLint trains will be able to run emission-free all day long on the EVB network with just one tank filling. Expansion areas at the filling station will allow hydrogen to be produced on site later using electrolysis and regenerative electricity.

The trains operate on a 100 km of line running between Cuxhaven, Bremerhaven, Bremervörde and Buxtehude, replacing EVB’s existing diesel fleet. Initially, the trains are fuelled at a mobile hydrogen filling station.

In 2017, LNVG and Alstom signed a contract for the delivery of 14 Coradia iLint trains and the provision of a period of 30 years of maintenance.

“We are proud that we were the first railway company in the world with permission to operate fuel cell trains on the Weser-Elbe network. Our passengers were very curious about the trains and their technology from the very beginning. In addition to the very low noise level, the hydrogen train impresses with its zero emissions, especially in times of climate change,” said Andreas Wagner, head of the SPNV division and authorised signatory of the Eisenbahnen und Verkehrsbetriebe Elbe-Weser GmbH (evb).

The project has received federal subsidies through the national innovation programme for hydrogen and fuel cell technology of the Federal Ministry of Transport, and Digital Infrastructure NOW GmbH will coordinate the funding guideline and Project Management Jülich (PtJ) is responsible for the implementation.