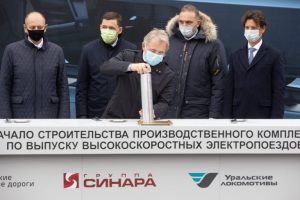 Yury Borisov, the Deputy Prime Minister of Russia, Oleg Belozerov, the CEO of RZD and Roland Busch the Deputy CEO of Siemens AG online participated at the event.

“A powerful high-tech production plant has been created. The huge experience and the necessary competencies will create the new generation of rail transport in the country. I am sure that no external influences will be able to prevent you from implementing the plan for the implementation of the most ambitious project in the transport engineering industry for the near future: the creation of Russian high-speed rolling stock and its serial production,” the Deputy Prime Minister of Russia said.

The companies plan to jointly assess the market demand for the construction of high-speed trains to serve passengers on the new high-speed railways to be built in the coming years in Russia. The goal is to develop a technical and commercial proposal for these trains and create conditions to produce the high-speed trains by Ural Locomotives. The parties plan to supply and service the electric trains throughout the life cycle, which at the first stage will operate on the Moscow – St. Petersburg high-speed railway line.

“The Ural Locomotives plant is currently the only one in the country, which is ready, by 2025 to master and start serial production of high-speed trains. The enterprise owns a powerful, modern production complex, the latest technologies, its own design school, its specialists are trained and have the necessary competencies,” the President of Sinara Group said.

Under the project, Ural Locomotives will ensure the production of the trains with a localisation level of up to 80% and further maintenance of the rolling stock.

The creation of the high-speed train plant needs an investment of over RUB 10 billion (USD 124.1 million).

“We all share a common goal and believe that the production of innovative high-speed trains should be organised as much as possible in Russia. We hope that the signed letter of intent will help create a new generation of railway transport at Russian facilities and for Russian passengers,” Alexander Liberov, the President of Siemens Russia said.