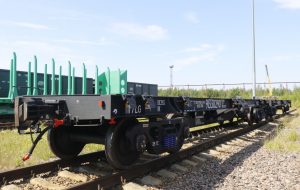 United Wagon Company (UWC) has obtained a compliance certificate from the Register of Certification on the Federal Railway Transport for its new container flat car, model 13-6724, and embarked on a contract to supply 1,000 freight cars to transport company Laude Smart Intermodal.

In September 2020, Laude Smart Intermodal and UWC signed the contract to develop and deliver the new container flat car fleet designed by engineers from All-Union Research and Development Centre for Transportation Technology (VNICTT), which is part of UWC.

The car prototypes were built at the group’s railcar building site in Tikhvin. By the end of last year, they had undergone a full set of stationary, service life and in-motion tests. In the second quarter of 2021, all formalities to put the car into production were completed and the car, model 13-6724, was awarded a certificate of compliance with the Technical Regulations of the Customs Union “On Safety of Railway Rolling Stock”.

The new flat car is designed to operate on the 1520-mm gauge rail network. They feature loading length of 46 feet and have a capacity of 80 tonnes. The freight car is intended for transport of containers with gross weight up to 40 tonnes, primarily in cross-border traffic with European countries.

The economic benefits from moving freight containers on the UWC flat car renders economic are achieved through both the increased load capacity of the car itself and higher container volume, with the length increased from 20 ft to 23 ft / up to 7,010 mm. This container can carry 13 pallets measuring 800 x 1,200 mm and up to 10 standard pallets measuring 1,000 x 1,200 mm, while a standard 20-foot container carries only 11 and 8 pallets respectively. The increased length of the container allows to load and transport various assortments of coiled steel and other piece freights.

Following three years of cooperation with UWC, the 40-foot flat car fleet of Laude Smart Intermodal is operating between Russia and Poland and the Sgmmns-type container cars are used for international transport services in the European Union.