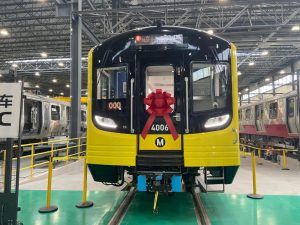 CRRC Changchun has unveiled at its Springfield rail facility in Massachusetts the first HR4000 metro cars for Los Angeles.

Expressing its excitement, the mayor has congratulated CRRC for its continuous trust and support in Springfield. “CRRC has trained many qualified employees. The vehicles manufactured in the Springfield plant will be used in more cities in the US,” Domenic Sarno said.

In April 2017, LA Metro and CRRC have signed a USD 647 million framework agreement for the supply of 282 HR 4000 metro cars with an initial order for the delivery of 64 rail cars with a value of USD 178 million. The remaining railcars to be acquired will be ordered through five options for an additional 218 vehicles.

Under the agreement, the first batch of metro cars will be delivered in September 2021, replacing 30 existing railcars on the Red and Purple Lines. As the LA Metro is working to extend the Purple Line, 34 new metro trains will enter services on this 14.5 km extension to Westwood from 2023.

The new trains will replace the LA Metro fleet that has an average age of more than 20 years old.

The mock-up of the metro car was presented in November 2019.

The most noticeable design change for the HR4000 metro cars is the bench seating. The side-facing seating configuration allows for a wider walkway and more room for standing passengers. Some other changes include an illuminated line map, USB ports for passenger use and a new design in the bike area that will offer a strap to secure bikes. Please note this is only a mock-up, and final design may be subject to change.

The manufacturing of the exterior shell of the metro train took place in China, while the final assembly was done at the facility in Springfield. A new facility is planned for the L.A. area to manufacture some of the components of the new rail cars.