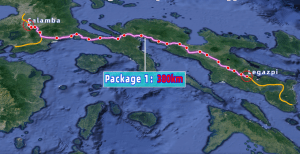 The CREC joint venture, comprising China Railway Group, China Railway No. 3 Engineering Group, and China Railway Engineering Consulting Group will be responsible for the design, construction, and electromechanical works for the first 380 km of line from Banlic, Calamba to Daraga, Albay.

The project will also involve the construction of 23 stations, 230 bridges, 10 passenger tunnels, and a 70-hectare depot in San Pablo, Laguna.

“This milestone is a huge leap towards realizing this long-awaited project – the PNR Bicol rail project. We are grateful to our development partners from China for supporting us in this endeavor and believing that the Filipino people deserve an improved quality of life,” the Secretary of DOTr Art Tugade said.

The first section of the entire line will cross 39 cities and municipalities, four provinces, and two regions. The project, implemented by the DOTr and the Philippine National Railways (PNR), will consist of a 565-km rail system connecting the metropolitan area of Manila with the southern Luzon provinces of Sorsogon and Batangas.

“This is another milestone for China – Philippines cooperation. The USD 2.8 billion railway, one of the flagship projects under President Duterte’s “Build, Build, Build” program, is so far the highest-funded Government – to – Government project between our two countries,” the Chinese Ambassador to the Philippines Huang Xilian said.

After its completion, the new rail connection will serve up to 14.6 million passengers per year.

During construction phase, the project is expected to generate more than 5,000 direct jobs per year.