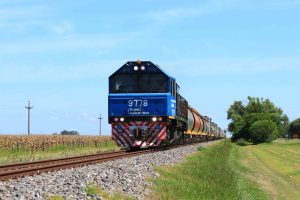 Trenes Argentinos Infraestructura announced that 900 km of Belgrano Cargas network is renovated, a project that included track and bridges renewal, the modernisation and contruction of Gran Rosario terminals which, for the first time, allow direct train access to the ports.

“Reactivating the freight rail infrastructure lowered the logistics costs generating employment and growth. Every wagon, every kilometer of the renewed track brings us closer to having an increasingly better train service to transport Argentina’s products. Having completed the first 900 km of renovation is an unprecedented fact in our railway history,” Guillermo Dietrich, the Minister of Transport, said.

In October, Belgrano Line transported approximately 238 thousand tonnes, which is 160% more that in the similar period of 2015.

For the Grand Rosario port network, which has five ports, USD 122 million was the value of investment  for a new direct rail access to Timbúes terminal. The works included the construction of a rail section in Oliveros, a railway bridge crossing Carcarañá River, and 10 km of lines for direct access to the terminals of Renova, Dreyfus, Cofco 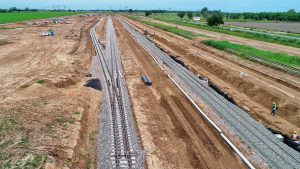 International Argentina, Aceitera General Deheza and la Asociación de Cooperativas Argentina. Following the project, the traffic will increase from 11.5 million tonnes to 24 million tonnes, while the access to a more competitive freight transport services will reduce the costs by 30%.

This year, the cargo volume to the ports of Gran Rosario will be increased by 2.5 times or 142%, from 700 thousand tonnes to 1.7 million tonnes.

The Belgrano Cargas project has a value of USD 3 billion which includes the renewal of 1,700 km of lines that cross the provinces of Salta, Santiago del Estero, Tucumán, Chaco and Santa Fe. The project also envisages rolling stock fleet renewal by the procurement of 107 locomotives and 3500 new wagons. Currently, 40 locomotives and 1000 wagons were delivered.