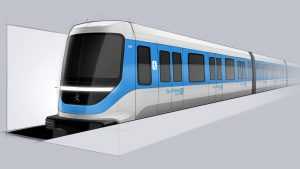 Société du Grand Paris, in agreement with Île-de-France Mobilités, awarded Alstom a EUR 230 million contract to design and supply 37 metro trainsets with a firm order for 15 trains for Grand Paris Express Line 18. The contract also includes solutions for driverless automated systems, data transmission, centralised supervision controls and the overall integration of the transport system. The contract is co-financed by Société du Grand Paris and Île-de-France Mobilités, which is responsible for the rolling stock and on-board equipment.

The new trains belong to the same Metropolis metro platform to be delivered for lines 15, 16 and 17 of the Île-de-France network. The design of the new metro trains has been unveiled in October 2020.

The train optimises time and development costs while making it possible to share the same architecture and components. This new rolling stock is suited to the specific requirements and characteristics of Line 18. Its architecture and interior fittings have been designed to maximise train capacity while enhancing comfort, accessibility and passenger flow. It features wide corridors, easy circulation throughout the train, three wide doors per car and spacious panoramic openings at each end.

At peak times, each train will be able to carry 498 passengers of which 54 seated at commercial speeds of up to 100 km/h.

Line 18 is a 35-km automatic metro line, including 14 km of overhead lines, which will eventually link Versailles to Orly airport in 30 minutes, passing through the Saclay plateau, well-known for its major education and research centres. In 2020, Société du Grand Paris awarded a EUR 799 million contract for the construction of the first section of Line 18.