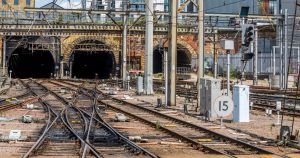 Network Rail awarded Alstom a signalling contract for South London area over the next 3 years. The £5 million (EUR 5.46 million) signalling renewal design contract is part of the Phase 4 of a major scheme in the Victoria area and is awarded through the major signalling framework agreement in Network Rail’s Southern region.

Alstom will deploy a number of digital-ready technologies that will bring much needed reliability improvements to support traffic levels and deliver greater efficiencies such as reduced operational expenditure and maintenance costs.

The project will upgrade the signalling infrastructure in the South London area between Tulse Hill, Crystal Palace and Peckham Rye.

The signalling contract for South London involves the replacement of 100 signalling equivalent units including 63 new signals and two major signalling structures, creating a more reliable service for passengers from across South East London.

Alstom has also committed to working with Network Rail and its supply chain, local schools and colleges to build a diverse and sustainable workforce with apprenticeships in London Boroughs across a range of technical roles, from engineering to construction and site management over the next three years. 31 new apprentices, including 9 engineers, have already been hired.

Alstom has committed to reduce energy usage on signalling projects by 20% and ensure at least 90% of waste is recycled as part of the industry’s ongoing efforts to make rail more sustainable.

In February, Network Rail announced Alstom the winner of two out of the five signalling frameworks with a potential value of £ 750 million (EUR 819.8 million). Alstom won the contracts for Southern and Eastern regions.