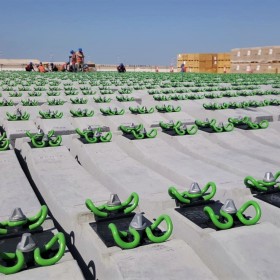 Vossloh won a contract for the supply of turnouts and rail fasteners for Stage Two of United Arab Emirates railway network project.

The contract was awarded by the JV comprising China State Construction Engineering Corp. and South Korea’s SK Engineering & Construction which is responsible for the construction of a 139-km rail connection between Ruwais with Ghuweifat as part of the Package 2A.

Until the end of October 2020, Vossloh will supply a total of 38 turnouts and 495,000 sleeper sets of the rail fastening system W 30 HH for this 139 km long new line. For the project, the specifications of the future integrated Etihad Rail network with mixed-use traffic have already been taken into account.

The second stage envisages the construction of the 605 km rail link fom Ghuweifat on the border with Saudi Arabia to Fujairah on the east coast of the United Arab Emirates. Because of its dimension, the standard gauge and mainly double-track network will be constructed in five phases.