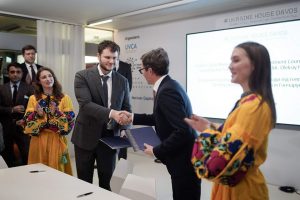 The Minister of Infrastructure of Ukraine, Vladyslav Kryklii, and Deutsche Bahn signed a Memorandum of Understanding on further cooperation in the transport sector and the development of the state-owned company, Ukrzaliznytsia.

The MoU was signed in the presence of the Prime Minister Oleksiy Honcharuk in Davos during the Economic Forum.

The Ukrainian authorities consider that the collaboration with the German company will improve the efficiency of country’s railway transport and will pave the way to reform the railway system. “The development within the TEN-T is a strategic goal for Ukraine. An important component of the implementation of the Association Agreement between Ukraine and the EU is the adaptation and implementation of EU directives related to railway transport. We expect that the new law on railway transport will be adopted by the Parliament in 2020. The experience of such company as Deutsche Bahn is important for its practical implementation,” Vladyslav Kryklii said.

Ukraine intends to liberalise the railway transport market and to increase private sector competition, as part of a Presidential decree and action plan on the transformation of UZ. The company has to implement new projects, plans and programmes needed to be made to the structure and various operations of the UZ in accordance with strategy approved by the Cabinet of Ministers of Ukraine, to achieve the unbundling of the comnpany’s services into distinct operating units involving freight, passenger transport, heavy maintenance and the creation of an infrastructure manager.

In November, the Supervisory Board of Ukrzaliznytsia reviewed the practices in other European countries and Ukraine’s obligations under its international agreements regarding access to infrastructure. The Supervisory Board came to the preliminary view that the at least during the envisioned initial stages of this transformation of UZ to achieve the targeted liberalisation and competition as well as equal and fair access by all to Infrastructure assets.

Ukrzaliznytsia has to be prepared for an open and competitive rail market, which will require a substantial increase in the company’s productivity, efficiency and performance.