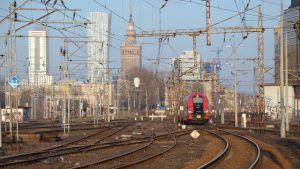 PKP Polish Railway Lines has signed a contract for the design of two new stops on the Warsaw cross-city line at Rondo de Gaulle’a and between Solec Street and Wybrzeże Kościuszkowskie street.

The project is funded through through the Operational Programme Infrastructure and Environment (OPI&E).

The contractor will also plan a wider tunnel of the diameter line and the construction of two road connections and will analyse and propose the most advantageous variant of construction of new facilities.

The two new stops will increase the access to railways and facilitate the transport connections in the capital.  Recently, the railway infrastructure manager has reopened Warszawa Główna which was closed for 24 years.

“The modernisation of Warsaw cross-city line is one of the most railway investment in the Warsaw agglomeration in recent years. I am glad that on this occasion, additional stops may be created, which will consider the communication needs of Warsaw residents and travelers from the agglomeration. The cross-city line will be intensively used by travelers and in the future will benefit the link to Warsaw metro, thus reducing the traffic load on Aleje Jerozolimskie [Jerusalem Avenue, one of capital’s main streets],” Andrzej Bittel, secretary of state at the Ministry of Infrastructure said.

The design work foresees a wider and higher tunnel of the line. The facilities will be equipped with security systems and will benefit sidewalks and emergency exits. In accordance with the assumptions of the Master Plan for Warsaw, the design documentation for the reconstruction of the cross-city line will be supplemented with new railway connections. Designs for double-track lines from Warsaw East towards Gdańsk and Białystok will be carried out.

“We want the reconstruction of the cross-city line in the capital to take into account the transport needs of travelers and residents, which is why we introduced, among others, two additional stops and new rail links,” Ireneusz Merchel, the CEO of PKP PLK said.