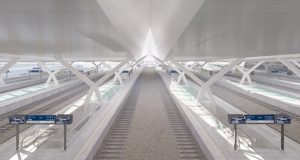 Under the contract, MGGP will provide supervision during the construction works, financial management of the contract and assessment of compliance of the works within the modernisation project.

PLN 1.9 billion (EUR 414 million) is the total value of the station modernisation project which will provide passengers comfortable regional and long-distance transport services and efficient running of the rail agglomeration network.

“The signed contract for the supervision for the Warsaw Zachodnia modernisation provides support for the investment that opens the modernisation of the Warsaw cross-city line. This is one of the large projects of the National Railway Programme, which is 85% advanced. PLK already has projects for the new financial perspective that will continue the development of railways,” Ireneusz Merchel, the CEO of PKP Polskie Linie Kolejowe said.

The project involves the reconstruction of the station with a modern design. All platforms will be roofed and will be fully accessible to people with reduced mobility. Escalators, a signage system and a passenger information system will facilitate the use of the railway transport services. An additional platform will be constructed to increase the possibility of organising efficient connections.

The connectivity in the area of the station will be facilitated by a footbridge that will connect Wola and Ochota, while an underpass, that will be higher and wider, will provide the connection with the area of the  waiting rooms and ticket offices. The passage will be extended to the platform No. 8 at the perimeter line.

Warszawa Zachodnia (Warsaw West station) is the largest station in Poland in terms of the number of trains running. On average, 1000 suburban, regional, national and international long-distance trains pass through the station daily.

The project is scheduled to be completed in the second half of 2023.

The station will also have a tram connection through a 1.6 km-long extension and an underground stop.