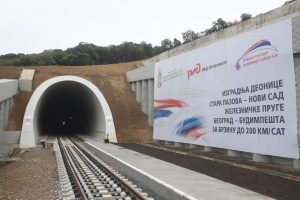 Russian Railways has completed the rail track of Chortanovtsi tunnel and viaduct over the floodplain of the Danube River which will ensure the connection on the Belgrade–Budapest line.

The Serbian President Aleksandr Vučić, the Minister of Transport Tomislav Momirović and the President of Russian Railways attended the ceremony which was held on August 24, 2021.

“The largest work on the most beautiful part of the railway from Belgrade to the border with Hungary is coming to an end, and in six months the citizens will be able to travel a completely new fast railway from Belgrade to Novi Sad. The track will be finished by the end of the year and then the testing of trains running at the maximum designed speeds, will be performed” Aleksandr Vučić said.

The tunnel and viaduct are situated on the Stara Pazova–Novi Sad rail section for which RZD International carried out large-scale construction works.

The tests will take place section by section. In January, the tests will start from Batajnica to Stara Pazova and if successful, the first train will be put into commercial operation in October.

In April, six months ahead of the contract terms, RZD International has completed the construction and installation works for a 3 km viaduct and the Chortanovtsi tunnel, one of the two of the largest railway facilities in Serbia.

The work on the construction and modernisation of the 40.4-km Stara Pazova–Novi Sad line is at the final stage and will be completed on schedule. The construction and installation have already been completed on all structures of the Stara Pazova–Novi Sad section, noise-reduction screens have been installed, and 85% of the track superstructure has been laid. In addition, the overhead lines are being insallted for electrification, the old station is being remodeled, and a new station and office buildings are being built at a quickened pace.

After it is completed, the Stara Pazova–Novi Sad line will become Serbia’s first high-speed railway, with trains reaching speeds of up to 200 km/h. To confirm the reliability of the facilities and ensure compliance with international standards, leading European railway companies took part in quality control and testing.