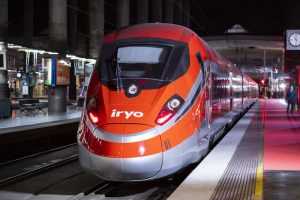 Trenitalia may receive a EUR 550 million funding from the European Investment Bank to acquire 34 high-speed trainsets as the bank is currently assessing the project.

The new trains estimated at EUR 1.2 billion will be used to provide transport services in Spain and Italy. In Spain, 20 trains will be operated by Ilsa under a lease from Trenitalia. In August 2020, Trenitalia awarded Hitachi Rail and Bombardier Transportation now Alstom a EUR 797 million for the delivery of 23 Frecciarossa 1000 high-speed trains. From 2022, they will enter commercial services on the Madrid – Barcelona, Madrid – Seville/Malaga and Madrid – Valencia/Alicante high-speed rail lines under an agreement signed with Adif. The contract is part of the recent liberalisation of Spanish rail passenger market under which Adif signed 10-year framework agreements with Ilsa and Rielsfera, a subsidiary of SNCF, to operate three high-speed lines.

In October, Ilsa and Hitachi Rail signed a EUR 737 million 30-year contract to provide maintenance services for a fleet of 20 new ETR 1000 trains at Madrid facility.

EIB is also considering the financing for 14 high-speed trainsets which will be operated by Trenitalia in Italy on open access on the high-speed network. The trains are part of a EUR 575 million contract signed in 2019 with Hitachi and Bombardier Transportation. The 200m-long trains are capable to run at speeds of up to 360 km/h and have a capacity for 460 passengers. The trains provide a meeting room and bistro area. The Frecciarossa 1000 high-speed trains are manufactured in Italy and comply with all TSI requirements. They are equipped with energy-saving technologies and provide passengers Wi-Fi onboard connection.

Recently, Alstom agreed to transfer Hitachi Rail the V300 Zefiro high-speed train platform business previously owned together with Bombardier Transportation. But according to the commitments Alstom proposed to the European Commission, this move is part of the acquisition of Bombardier Transport.