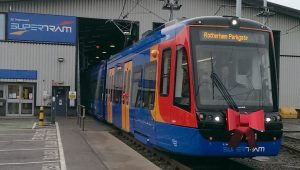 The project is a key part of the Tram Train Pilot scheme in South Yorkshire which runs between Sheffield Cathedral and Rotherham Parkgate via Rotherham Central station, linking previously unconnected areas.

The pilot, funded by the Department for Transport, has been running for two years to test customer satisfaction, passenger numbers, reliability and costs. The scheme has proven popular and scored 96 per cent for user satisfaction on the latest independent survey by Transport Focus.

The hub is owned and managed by Network Rail. The hub, a key objective and outcome of the pilot scheme, is a comprehensive body of learning available free of charge that will benefit and boost future light and heavy rail hybrid schemes like tram train. It is hosted by the web-based SharpCloud system and is further enhanced by easy navigation, a high-quality graphic interface and updates through to mid-2021.

“The launch of the learning hub marks another major milestone in the delivery of the Tram Train Pilot. I thank my colleagues in SYPTE, Supertram and Network Rail for helping to compile the information and data that makes this a very comprehensive learning resource,” Simon Coulthard said.