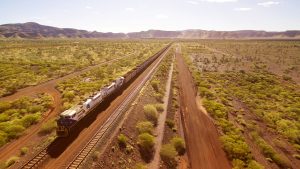 AUD 130 million (USD 99.47 million) was the contract value signed by John Holland and Fortescue and covers an extension to the existing signalling and train control systems and traffic capacity upgrade to the communication infrastructure.

The remaining works to be performed by John Holland cover destressing 130 km of the track, siding extension works and final grinding and correction. Final ballasting and tamping work for 60 km of the track is on schedule. All remaining track works are to be completed by June 2021. The signalling and communication installation are well ahead of schedule to be delivered by the end of August. Testing and integration of the track will be finalised in December.

“The safe unloading of the last long weld rail off the final rail train on the Eliwana project was a significant moment for us. It’s a huge undertaking – more than 240,000 sleepers were laid as well as 400,000 t of ballast dropped with more than 12,000 welds joining the tracks together,” John Ma, John Holland Rail Delivery Manager said.

When completed, the Eliwana rail line will connect the new Eliwana iron ore mine to the existing Fortescue Hammersley Line.

Fortescue is developing the Western Hub in the Pilbara region, which includes significant amounts of high iron content bedded iron ore and is home to Fortescue’s newest mine, Eliwana. Located 140 km to the west of Solomon and 90 km north west of Tom Price, the Eliwana mine started operations in in December 2020, which includes the 143 km of rail and the production of 30 million tonnes per year.

Fortescue’s wholly owned and integrated operations in the Pilbara include the Chichester and Solomon mining hubs and the Western Hub, which is currently under development. Its mining infrastructure is connected to the five berth Herb Elliott Port and Judith Street Harbour towage facility in Port Hedland via the fastest, heavy haul railway in the world.