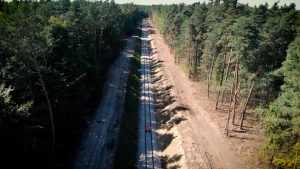 In June, the two companies signed a contract for the supply of pre-stressed concrete sleepers and the fastening systems for the new test track in Nowa Sarzyna, Podkarpackie voivodship, south-eastern Poland.

In June, Nevomo and Ciech Sarzyna signed an agreement to lease, and the land develop the test infrastructure at Ciech facility. The 750-metre – long track will enable vehicles with a linear drive system and passive levitation to be tested. In addition, it will also allow the tests for the power electronic systems for powering and controlling a multi-segment linear motor.

If successful, the test will pave the way to the implementation of a pilot project for between 2022 and 2024.

To implement the project, a MoU was signed with Rete Ferroviaria Italiana which will verify the technical and economic feasibility of superposing magrail technology on existing railway infrastructures. RFI, the rail infrastructure manager of Italy will apply for European innovation funding, to finance a full-scale pilot at its test facility in Bologna San Donato. This will be the last stage of testing, which is expected to trigger the conformity assessment procedures needed to implement the magrail technology commercially.

It is expected that magrail will be compatible with the existing underlying railway system and will enable conventional and high–speed railway transport to be upgraded. There will follow an increase in speed of up to 75% regarding existing alignments, without the need to build new infrastructure. This will mean avoiding all heavy civil works and related investment.

Nevomo’s technology is currently at its first stage and will enable the transport of goods and people at double the average speed of a conventional railway. After infrastructure upgrades, the line will allow trains to run at a speed of 550 km/h.