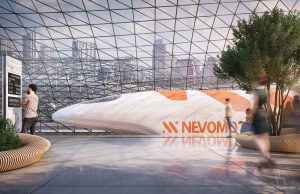 Nevomo, formerly known as Hyper Poland, has completed the first magrail technology tests on a medium-sized track, with a focus on the performance of a linear motor and in mid-2021 the company plans to start full-scale tests. This is a major step towards implementing hyperloop in stages, leveraging existing railway infrastructure.

Based on the experience of the medium-scale tests performed last year, the company will “launch the pilot programme and certification process as soon as possible. We want to make sure that the magrail technology will be ready around 2024-2025 to sign the first commercial implementation contract,” Przemyslaw Paczek, CEO and co-founder of Nevomo said.

The company is focused on the development of key hyperloop components such as the propulsion, levitation, and control subsystems. They can also be implemented as part of a unique magrail technology invented by Nevomo, a solution that allows for the use of magnetic levitation within the existing railway infrastructure and a stepwise approach to hyperloop. Consequently, the most modern means of transport can be implemented as a retrofit of existing railway lines, and hence it will not require huge investments in the construction of new transport corridors.

The vehicles will be able to move at speeds up to 550 km/h.

In Europe, the hyperloop technology is evolving as in February 2020 a key decision was taken in Brussels to establish a Joint Technical Committee of CEN and CENELEC (JTC 20). It aims to create a uniform system and technical standards and regulations of ultra-fast transport throughout the continent.

One of the ground-breaking initiatives that may accelerate the development of technologies based on the idea of hyperloop in Europe is the ‘HyperNex: Ignition of the European Hyperloop Ecosystem’ project lead by the Shift2Rail initiative. The project aims to start joint research and cooperation between businesses, research centers, and R&D institutions interested in developing a new generation of transport systems such as hyperloop. Nevomo is responsible for coordinating innovative concepts suitable for guided transport modes.

In addition, Nevomo will also take part in another European initiative. It is about the Dutch Hyperloop Development Programme that was announced last December. The launch of the programme is planned for the beginning of 2021. It will include the creation of the European Hyperloop Centre with a 2.6-km test track.

“With its expertise, Nevomo will make a valuable contribution to the R&D activities on engine and power system design that will be carried out within the Cargo working group,” Jeroen in ‘t Veld, president of the Hyperloop Development Programme said.