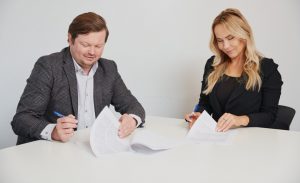 As part of the contract, Plastwil will supply top-quality pre-stressed concrete sleepers and rail fastening systems which will be used to build the full-scale test track facility in Poland. The construction will begin in the second half of this year.

Under the agreement, Nevomo will construct a 750-meter-long track which will be the longest track for passive magnetic levitation tests in Europe.

The Belgian company De Bonte has 30 years of experience in the manufacture of prestressed concrete sleepers, while Polish Plastwil has been a leading manufacturer of sleeper rail fastening systems for more than 35 years.

The cooperation with Nevomo fits perfectly in our future vision, where we create railway solutions for the next 20, 30, or even 50 years ahead. I am convinced that in the context of reducing human impact on the environment, railways are going to become the preferred mode of transport, and the development of such technologies as hyperloop is bringing us closer to its revival,” Izabella Walkowska, CEO at Plastwil said.

The pre-stressed concrete sleepers and the fastening systems will create the track systems for MagRail facility paving the way for the development of the new rail generation technology providing high – speed rail services at speeds of up to 550 km/h. The track will be built in the Nowa Sarzyna commune in the Podkarpackie voivodship in Poland.

“The support of Plastwil, which has a rich and international experience as a leading manufacturer of rail technology components, is very important for us. Thanks to this, further steps towards full-scale testing of magrail technology will be possible,” Lukasz Mielczarek, co-founder and Infrastructure Director at Nevomo said.

As part of the agreement, Plastwil De Bonte became Nevomo’s track partner and joined a group of other companies that are currently supporting the development of the magnetic railway including Idom, Ciech Sarzyna, Transfer Multisort Elektronik or the Railway Institute.