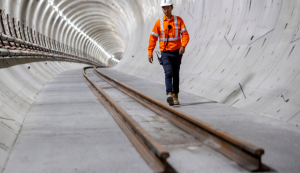 The first track has been laid at Chatswood towards Sydenham under the  Sydney Metro City & Southwest project, that will extend city’s driverless metro system from the north west, into the city centre and beyond.

Within the next months, 62 km of steel, weighing more than 4,000 tonnes, will be used to lay 31 km of railway tracks in the twin tunnels between Chatswood and Sydenham. The rail steel has been distributed through the metro tunnels using custom-designed excavators which can turn 360 degrees within the tunnels.

The Chatswood – Sydenham section is part of Sydney Metro City & Southwest involving the construction and operation of a new metro rail line from Chatswood under Sydney Harbour and through Sydney’s CBD out to Sydenham.

Specialised tunnel boring machines were used to excavate 15.5 km of new twin rail tunnels between Chatswood and Sydenham. This section required five TBMs. Two were launched and removed from the Chatswood and Marrickville dives sites, with the fifth from Barangaroo.

The new underground stations of the Stage 2 of Sydney Metro are designed to be as close to the surface as possible to allow customers to get in and out easily. At Crows Nest, Barangaroo, Central and Waterloo the stations will be excavated from the surface in a cut-and-cover construction method. At Victoria Cross, Martin Place and Pitt Street the station caverns will be mined out underground.

Under the project, the metro train will offer transport services from Sydenham to Bankstown, another phase of the metro development which includes the upgrade of T3 Bankstown Line between the two stations which will be converted to metro standard stations.